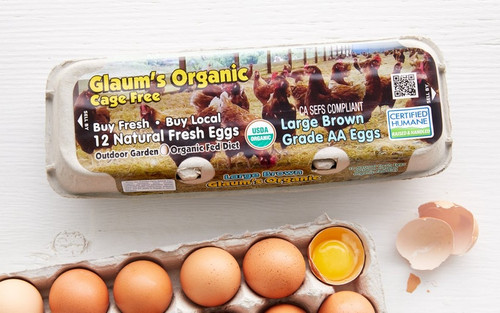 SKU:
4951
UPC:
Availability:
Some products are available for quick pick-up, others may require a longer-lead time. If you need a product urgently, please call 415-225-0589.

CERTIFIED HUMANE LOCAL EGGS! Marvin Glaum worked to keep his familys egg farming business in Aptos, California, going through tough times. Things have changed a bit since Marvin invented the egg vending machine (complete with dancing chicken puppets) thats still in use at Glaum Egg Ranchs processing plant. But the Glaum familys creativity, determination, and dedication to family farming are still at work, and the family business is going strong. Today, it has been almost 100 years and four generations of the Glaum family that continue to position their business for growth in a changing market, ready to meet and overcome the challenges that confront many small family farms. Doug works with his sisters Sherrie and Debbie, and two of his children Mikayla and Gunnar (as well as a few other employees) on the 28-acre ranch in Watsonville and the processing plant and headquarters in Aptos. We have always been told that family working together in the same business is unique, and most of the time unsuccessful, says Doug. Well, I guess we just beat the odds, just like surviving in the egg business. Rather than follow trends that have led to the demise of so many family farms, the Glaums have found ways to thrive. They raise cage-free Certified Humane Raised and Handled eggs, as well as organic eggs, to sell to grocery stores, restaurants, and walk-up customers in their new Barn Store on the property in Aptos. Dougs father, Marvin (son of John Glaum, Dougs grandfather and founder of Glaum Egg Ranch), died in 2004. According to Doug, Looking back on my childhood, I realize how hard my dad worked on the ranch. His ultimate goal and commitment were to better the ranch with all his innovations and inventions, to keep the ranch at its most efficient. Many of his inventions were published in national poultry magazines. We always wondered why he never patented any of his ideas, but his drive was different. He just wanted to take care of his family first, and then the ranch. Marvins creativity helped to broaden his businesss scope, such as when he decided to produce compost from the manure harvested from the chickens.Following their fathers death, the Glaums continued in his innovative spirit and converted their entire operation to cage-free and organic egg production. According to Doug, gaining Certified Humane status for the cage-free eggs made a lot of sense, given growing consumer awareness of humane issues. Since we decided to fully commit ourselves to becoming a cage-free ranch, I thought to validate who and what we have become, [working with] a third-party certifying organization would be the best path to take. That is where I found Humane Farm Animal Care and their Certified Humane standards. The fit was perfect, because we had set certain standards for Glaum Egg Ranch, and HFAC met all those, just as we met all their requirements. Although most Certified Humane egg producers were located on the east coast when the Glaum Egg Ranch became certified, Doug believed the label would make its way westward. Since the ranch joined HFACs program, according to Doug, I have seen the Certified Humane Raised and Handled label grow rapidly in the food service and retail establishments throughout the whole country, including the west coast. I look back at the decision I made and could not be more proud of being part of a unique and ambitious organization. Marvin Glaum would no doubt approve of the decisions that Doug and his siblings have made. Although Marvins death still hurts, says Doug, we know in our hearts he is with us for every move, decision, and challenge that we encounter.

ROOT Turnip GOLD, by the lb