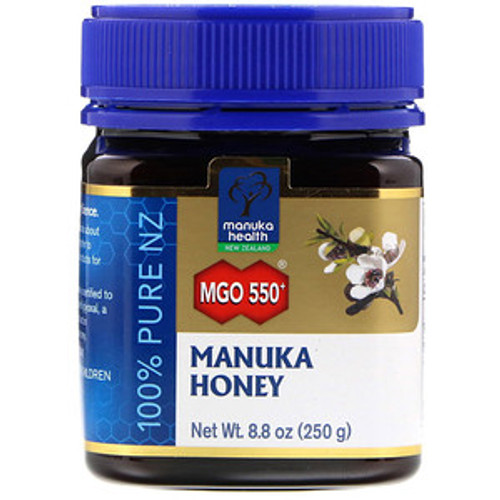 Is Manuka Health UMF Certified?
Manuka Health honey is UMF certified, which means it has a potency rating determined by its medicinal and therapeutic abilities. This version, Manuka Honey MGO 550, provides the next-to-highest amount of Methylglyoxal (MGO) possible according to UMF rating which corresponds to UMF 15+. Methylglyoxal is what gives Manuka its special healing powers. This means that Manuka Health’s Manuka Honey MGO 550 delivers a potent therapeutic effect which is widely used for treating many diseases and health issues.

Manuka Honey Benefits
As mentioned above, the amount of Methylglyoxal (MGO) in Manuka honey determines its level of potency and effectiveness. Manuka Health Honey, rated MGO 550 is very powerful and effective in treating a variety of health concerns. It has strong antibacterial, antiviral, anti-inflammatory, and antioxidant properties. Manuka can help wounds heal including burns, ulcers, wounds that are difficult to heal, and even antibiotic-resistant strains of bacterial infections such as MRSA. Manuka is also great for oral health, minimizing odor-causing bacteria and diminishing the ability for plaque to form. Since Manuka is anti-inflammatory, it can help reduce gum inflammation, soothe a sore throat, reduce inflammatory digestive problems, and decrease the irritation of acne. With its antibacterial effects, Manuka can also help treat acne and fight upper respiratory infections.

What Does MGO Stand for in Manuka Honey?
And, you might wonder what level of Manuka honey is best? First off, MGO stands for Methylglyoxal which is the main biologically active component that makes Manuka honey so special and beneficial. Methylglyoxal is actually found in all kinds of honey but it is most concentrated in Manuka. The more Methylglyoxal contained in Manuka, the higher MGO or UMF rating it will receive. This Manuka Honey MGO 550 is not the highest, top-shelf level, but it is close. It correlates to a UMF rating of 15+. And, just to give you an idea… UMF ratings start at 5+ and go up to 20+. MGO levels start at 83 and go up to 829. Methylglyoxal levels are the determining factor for deciding the right Manuka honey for your health needs. Manuka Health’s Manuka Honey MGO 550 is perfect for therapeutic use. If you are seeking medicinal use, you’ll want to find a MGO of 829 or a UMF rating of 20+.

Is Manuka Honey Safe?
Manuka honey is generally regarded as safe for consumption by most people. However, consult a physician before consuming if you are allergic to honey or bees or diabetic. Never give honey of any kind to infants or babies under one year old.

Unique to New Zealand MGO Manuka honey is the only 100% natural food in the world shown to have EFFECTIVE and RELIABLE anti-bacterial activity due to the active compound - Dietary Methylglyoxal which forms naturally in the manuka plant.

What Makes MGO Manuka Honey So Special?
Manuka Health's research partner research group led by Professor Thomas Henle, University of Dresden (Germany) has made the most revolutionary discovery in the history of manuka honey industry.

So far MGO Manuka honey has been the only food in the world found with such a significant Dietary Methylglyoxal content ranging from 20mg/kg to over 800mg/kg. In contrast all other honeys worldwide tested have ranged between 0 to 10mg/kg, other foods range from 0 to 50mg/kg with coffee and cocoa being the highest.

Manuka Health measures methylglyoxal content based on standards developed by University of Dresden. For example, MGO100 Manuka Honey is certified to contain at least 100mg/kg of dietary methylglyoxal, the minimum required for health benefits.

MGO Manuka honey is suitable for everyday use and can be used as a long-term maintenance dose. It can be taken by eating or application to the skin surface. You will find it has a wonderful taste all of its own and can be enjoyed the same as any other natural honey.

Health Applications
Today the health applications for MGO Manuka honey have greatly expanded and new areas are continually emerging. As well as providing the well-known benefits of natural honey against winter ills and chills, the MGO Manuka honeys have even proven effective in supporting good digestive health, wound healing and healthy skin. Demand for MGO Manuka honey as a natural health solution is growing rapidly worldwide.

Relation between Non-Peroxide Activity Rating & MGO
Manuka Health has decided to market its products based on the methylglyoxal content in the honey. For years we have used Non-Peroxide Activity rating (NPA) but the problem is most people have never understood it and therefore not believed in it. Only those who use it have learnt of the benefits. NPA certification system did not identify the compound in the honey responsible for the special anti-bacterial activity of manuka honey. No one did know what it was until very recently when University of Dresden, Germany discovered it was methylglyoxal.

This has created a wonderful opportunity to convince consumers of the special properties because they relate very quickly to the concept of a compound being responsible for the RELIABLE anti-bacterial activity. Also the measurement of the content can be shown e.g. 100 mg/kg. So Manuka health has trademarked MGO manuka honey worldwide and now shows on its products this information e.g. MGO100 manuka honey is the minimum methylglyoxal content required to kill all the major bacteria. This is equivalent to NPA 10.

Comparative figures are approximate due to the inaccuracy of the technique used to measure NPA.

Another major reason why we think introducing MGO manuka honey is great is because there are plenty of fake manuka brands out there. These brands piggy-back on the reputation of manuka honey and the fact consumers cannot distinguish between the sub-brands they see: Active, Bio-active, OMHA etc. Consumers look at the label see "manuka" and a number and then the price. The reality is the amount of methylglyoxal in these honeys is probably around 10 to 25 mg/kgs way below an effective level. However they are priced 50 to 75% of their equivalent NPA product e.g. Active 10 is sometimes 50% price of NPA10. The Active product is growing very quickly but consumers are being misled if they want a health product. By introducing a clear standard with methylglyoxal content consumers can demand to see the amount in the honey and distinguish between health and table honeys.

Enjoy 1 TBSP honey between meals or with warm water.

Not Suitable for children under 4 years of age.

Manuka Health mission is to bring natural health products to the world.  They have a great team of people gathering the raw ingredients from the trees, preparing the products and then delivering them to the four corners of the globe.  Why? Because they believe in their products and what they can do for you.  For centuries, New Zealand's native plants and trees have evolved their own defense systems against disease. Natural compounds exist within the trees and their flowers that have very high levels of health-giving properties.  Their challenge – and it's one they gladly accept – is to sustainably harvest and prepare these compounds to help improve your health and well-being.

Melon CANTALOUPE, by the ea

Melon HONEYDEW, by the ea

Beeswax, Organic by the lb block

Super Seed Everything Crackers, by the box

Beef Back Ribs, by the lb